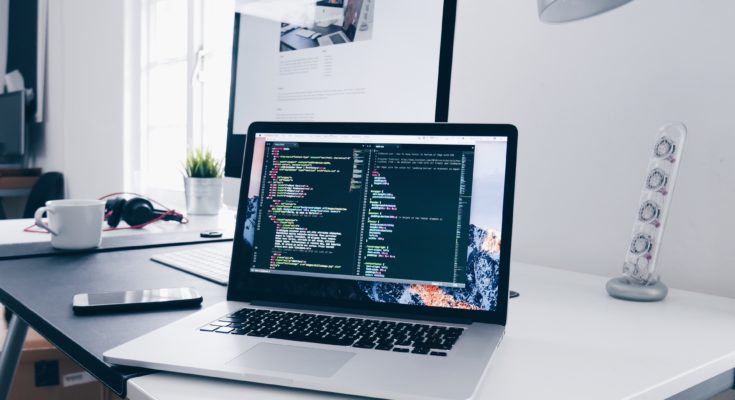 Robot programming can be so much easier with the right tools. Our new support for Visual Studio Code will accelerate your coding.

For years, I insisted on doing all my programming in a normal text editor. I don’t know why. Perhaps just out of the force of habit. I would type every line, every word, every semicolon of code individually.

There was no way for me to tell if I had made a mistake until I compiled the code, downloaded it to the robot, and pressed “Go”… and by then it was often too late. Lots of debugging was required.

Then one day, I discovered that text editors exist which are devoted to programming. They included features like syntax highlighting, code completion, and an integrated command line. Suddenly, my programming skills accelerated.

Our latest RoboDK update includes support for Visual Studio Code (VSCode) for the first time. As the most popular development environment of 2019, this new integration has the potential to accelerate your robot programming skills.

What Is Visual Studio Code?

VSCode is a cross-platform, open-source code editor made by Microsoft. It has versions for Windows, Mac, and Linux. In a survey of Stack Overflow users this year, VSCode was ranked the top IDE across all types of developers.

For many years, Microsoft was vehemently opposed to open-source software. But, more recently they have changed their tune and released some of their programming tools as open-source. VSCode was released under the open-source MIT license in 2015.

VSCode is part of the Visual Studio group of software tools which includes the following:

Visual Studio Code is a bit different from other versions of Visual Studio. It is much simpler and doesn’t focus everything around GUI development.

If you’re familiar with Visual Studio already (but not VSCode) you might be wondering what the difference is between the two.

Here are 5 differences between the two programs:

One of the key advantages of VSCode is that its features can be extended with plugins from the Visual Studio Extensions Marketplace.

Extensions exist for many different uses, including a ROS (the Robot Operating System) extension, various Python extensions, and a wealth of other extensions for specific programming tasks.

We now have our own RoboDK extension, which I’ll introduce below.

What the New RoboDK Support Can Do

We all have our own favorite editor for coding. RoboDK is very flexible in this regard as it has the capability to use any text editor.

Until now, many users just used Windows Notepad or the slightly more featured Notepad++. This was okay, though slightly cumbersome. VSCode provides a much richer set of features.

How to Use VSCode

Assuming that you have set VSCode as your chosen editor in the Options window (go to Tools>Options>Program), the editor will be called when you perform any of the following tasks in RoboDK:

As part of the new support, we have also released a VSCode extension for syntax highlighting. This feature changes the color of the different parts of a programming language and makes it much easier to see what each part of the programming is doing. This reduces the chance of coding errors upfront before you even get to the debugging stage.

Syntax highlighting can be tricky when you are using different robot brands because each manufacturer uses its own programming language.

We will continue to update the extension to increase support for more robot controllers and filetypes.

Keeping Up The Spirit of Open Source

Do you need a robot language which our extension doesn’t support yet?

We are also releasing the extension as open source. If you like, feel free to checkout the code library and add the support yourself, to benefit both your programming and other robot users.

What to Do Now

If you haven’t got the latest version of RoboDK, download it via the download page. You can try out the VSCode support immediately and get started with accelerating your robot programming!

What do you think of VSCode? Tell us in the comments below or join the discussion on LinkedIn, Twitter, Facebook, Instagram or in the RoboDK Forum.