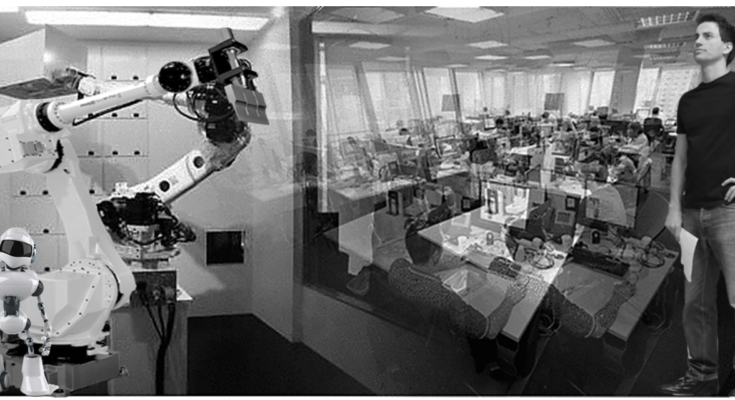 It’s undeniable: robotics is now a vital piece in the jigsaw of industry. Businesses, both small and large, often consider automation when designing their process and products.

But, what does this mean for professionals like us?

If you were to believe the media hype (and you shouldn’t) many jobs are in danger of being “stolen” by robots. This is an exaggeration. In fact, the spread of robots in industry means that job prospects for you could actually be better. Why? Because robot programming is an in-demand skill.

If you learn how to program robots, you’ll give yourself an “unfair advantage” which could benefit both your current business and your overall career.

But, why are there so few robot programmers? And, how can you take advantage of the situation? How can you learn robot programming without access to a robot? Let’s find out!

Why the Job Market is Crying Out for Robot Programmers

Automation is rapidly becoming a popular solution for companies which want to stay competitive in the global market. In the past, automation was only available for high-volume, low-mix manufacturers (e.g. consumer goods, automotive, etc). Now, new generations of robots mean that robotic automation is an option for businesses of all sizes. Companies are enthusiastically adding robots to their processes.

But, there’s a problem. Robots need to be programmed… and good programmers are apparently in short supply.

Companies have two options for programming a robot:

Companies who opt for the second option face a challenge. There are not enough people in the marketplace who have programming experience, according to a 2017 global survey of the robot programming services market.

According to Motoman senior sales manager Bob Graff, “Many companies using robots have a critical need for robotics and automation technicians.”

How You Can Take Advantage of the Situation

Whether you want to advance your career within your current company or you are looking for a job in the market, robot programming skills can set you apart from others. Even just a little bit of programming experience can give your CV an edge.

Robots Fill the Skills Gaps in

The problem is made even more urgent because robots are often seen as a solution to fill other skills gaps.

Some jobs are suffering from a skills shortage in the wider job market. When these jobs can’t be filled, either by recruitment or by moving workers within a company, skills gaps open up within that company. Robots are an increasingly popular solution to fill such gaps. Instead of struggling to find a new hire to fill a role, companies can add a robot. This allows them to better use the skilled employees that they already have.

Take the example of welding. As the IEEE reported last year, there is a lack of skilled welders in the US job market. The reason is that many welders are retiring and there are not enough new welders to follow them. Robots are a good solution to overcome this skills shortage.

Welders at a General Electric plant in Texas found the perfect way to solve this problem — they became robot programmers themselves. The company decided to train their welding team to program industrial robots. This had the added advantage that it reduced the physical strain of welding, which meant that their team (many of whom were reaching retirement themselves) could enjoy their jobs without fear that they might injure themselves.

Some people might be concerned about programming a robot to do their job. However, in almost all cases, workers who learn to program don’t “make themselves obsolete” as they initially fear. Instead, they make themselves more indispensable. As one industry expert said: “If a robot can take your job, you need to up your game.” “

How to Take Advantage of the Situation

By learning to program robots to perform certain parts of your job, you can help to fill internal skills gaps. This may help you to advance within your company and pave your way to further success. The new skill will also broaden your horizons for future employment.

How to Learn Robot Programming Without Access to a Robot

Whether you are working for a company which is considering robotics or you are looking for a job in the market, robot programming is a good skill to have.

But, how do you get started if you don’t have a physical robot to learn with?

Here are some options:

Whatever learning method you choose, now is certainly a good time to learn robot programming!

What do you still need to learn about robot programming? Tell us in the comments below or join the discussion on LinkedIn, Twitter, Facebook or Instagram.