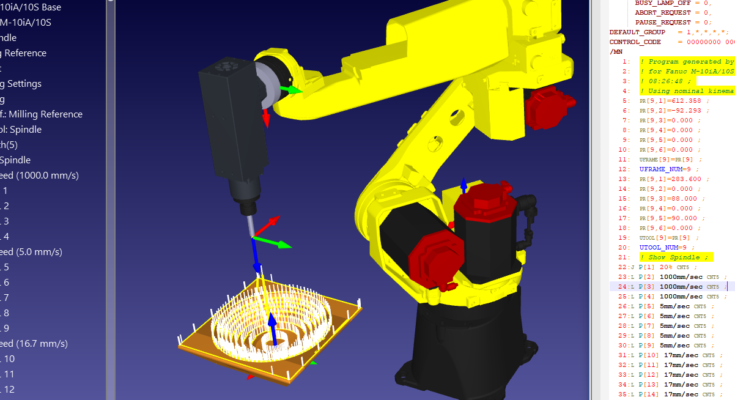 Post-processors are the bridge between the offline programming software and your robot.

This article will tell you everything you need to know about robot post-processors in RoboDK.

What Is a Post-Processor? 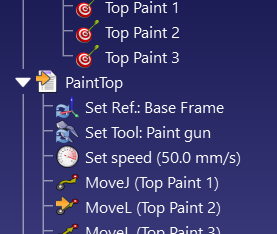 Most robot programs contain the same basic commands, which are used over and over again. The three most common are:

Offline programming software creates programs using a generalized version of these (and other) commands which can be applicable to any robot.

The problem is that each different manufacturer has a different way to program commands into their robots. Many manufacturers have their own custom programming language and some even use slightly different commands for different versions of their controllers.

For example, here is how the three commands I listed above are expressed for different robot controllers. In parentheses, I’ve also shown the minimum number of parameters and values required to control a 6DoF robot:

As you can see,  each command is similar between each robot type. However, there is a difference in the wording and in the amount of information required to define each instruction.

Without offline programming and post-processors, you would have to learn a completely new programming language every time you programmed a new type of robot. This significantly slows down robot programming.

Post-processors work by translating the commands into a specific program for your robot model.

With RoboDK, you don’t have to learn a programming language to get your robot moving. The post-processors provided are usually enough to generate usable, bug-free code for over 30 brands of robot.

The post-processor also generates all the necessary initiation code and variable definitions, which are often a nuisance to define in regular text-based programming.

5 Steps for Picking the Perfect Post-Processor

How do you choose between them?

If you have used one of the robots from our Robot Library, you will find that one post-processor is already selected as a default. Often, this is assumes you are using the latest (or default) controller for that robot. However, you may find that you need to select another one if the default post does not suit the needs of your application or setup. 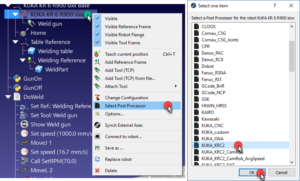 1. Pick the Post-Processor for Your Robot Brand

Usually, it’s best to try the default or most basic post-processor first.

Some robot brands only have one option provided by default in RoboDK, e.g. Mecademic, Kawasaki, CLOOS, etc. In this case, your choice is very simple.

2. Pick the Post-Processor for Your Controller

3. Pick the Post-Processor for Your Application

Some robot brands have quite a few different post processors. KUKA has 10!

Some of the extra post processors are for specific applications or setups. For example, there are 5 post-processors for the KUKA KRC2 controller. Two of these are for applications using their CamRob milling add-on or KUKA CNC control, which allows having thousands of lines of code in one program file (suitable for robot machining). One is specifically for Arc Welding applications. Similarly, there is a UR post-processor that integrates Robotiq grippers.

4. Pick the Post-Processor Which You Can Easily Update

Sometimes, the program generated by RoboDK won’t be exactly right for your application. You might want to add extra lines of code to extend the functionality. This very easy to do if you are a little familiar with your robot’s programming language.

A few of the post-processors are provided to make it easier to change and update the generated code.

For example, the KUKA KRC2 has options which generate a DAT file. These are an interesting feature of the KUKA controller. In this configuration, positions are stored as variables into a separate DAT file, which can sometimes make it easier to update the code as you only need to change the variables to alter the positions.

Choose the post-processor which makes it as easy as possible for you to update the robot code, should you need to.

In some circumstances, you might need to write your own post-processor, such as when you are using your robot in a unique configuration.

You may also want to customize an existing post-processor for your specific setup or application.

It is very easy to write custom post-processors in RoboDK as all of them are Python programs and are written in a similar format.

You can see a simple tutorial which shows how to create or update a post-processor in this video.

Check out the post-processor page in our documentation for more details.