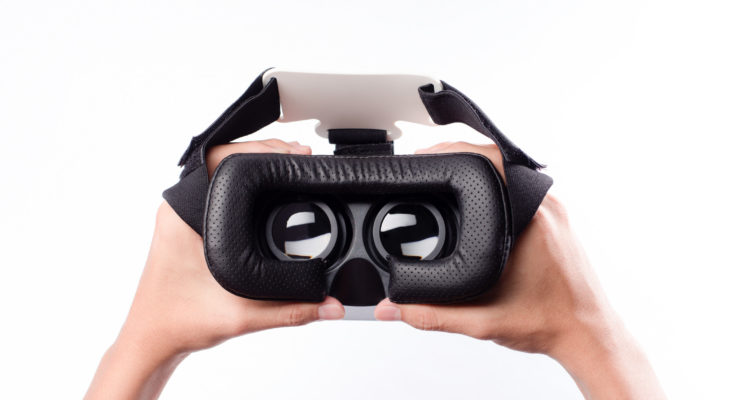 The latest version of RoboDK includes virtual reality support for the very first time. What technology do you need to use this new feature? Here’s a guide.

Virtual reality (VR) has been gradually making its way into businesses over the last decade. As VR technology has gotten smaller, better, and cheaper, the number of industrial applications has grown. Industries as diverse as health care, retail, defense, logistics, construction, and automotive are already on-board.

However, although the technology is cheaper and better than it has ever been in the past, there is still an initial cost. If you want to try out virtual reality for yourself, you’re going to have to invest in some new technology.

If you want to try out our new VR feature in the latest version of RoboDK, you’ll have to buy, borrow, or rent some VR kit.

Here’s an introductory guide to the tech you will need for virtual reality robot programming.

The High, Medium and Low End of VR Technology

Almost every virtual reality system is based around a headset. This is strapped around your head and contains a screen which is held a few centimeters from your eyes.

But, before you can get a VR headset strapped around your head, the first hurdle is getting your head around the different types of VR headset!

There are at least 4 different options:

The ultra-high-tech option involves kitting out an entire room with detailed body trackers and equipping the user with haptic vests. Using custom-designed tools that are tracked in the real-world, the users can interact very realistically in the virtual environment, both with the virtual world and with other users who are in the room with them.

This ultra-high-end of VR is brand new — the only company I know is doing it is startup Sandbox VR which was Series A funded in early 2019. It is also almost certainly far too advanced for such a simple task as offline programming a robot.

The next step above this is probably “full dive VR” which would use a brain-computer interface and is still a long way off.

The most accessible high-tech option is a dedicated VR headset and tracking system. There are several of them on the market. The most well-known are probably the Oculus Rift S and HTC Vive, both of which we’ve tested in RoboDK.

These offer the most comfortable, immersive virtual environments available in the consumer market. Unlike cheaper options, they give you a feeling of virtual “presence” as they track your position in the room, not just “immersion” which is provided by the headset.

There are a ton of medium-range VR headsets available on the market from a huge number of manufacturers. Think of the name of any tech company and they’ve probably got a VR headset. Examples include Samsung Gear, Lenovo Explorer, Acer WMR, HP Reverb, and Dell Visor.

The differences between these headsets vary wildly. Some, such as Samsung Gear, are a single step up from the Google Cardboard (see below) and use your smartphone as the screen. Others have capabilities that near the high tech category.

The cheapest option is to use Google Cardboard or headsets working on a similar principle. These use your smartphone as a screen and provide lenses which focus the images from the phone onto your eyes but no extra sensors. Often, they have a button which presses the screen for you, but that’s all the interaction you get.

These are very low-tech — Google Cardboard is literally made of cardboard — and the feeling of immersion is not as good as with more expensive options. However, they are a low-cost way to try out VR for yourself.

The new virtual reality feature in RoboDK should be compatible with any headset that works with SteamVR/OpenVR. This is because we used the OpenVR library to develop it, which is compatible with a range of different headsets (though it’s difficult to find a definitive list).

At the time of writing, we have tested the new feature with the Oculus Rift S and the HTC Vive, but it should also work with other headsets.

For cheaper options, including Google Cardboard, you would need to use a program like RiftCat which allows your PC to stream its display to your smartphone.

5 Options for Trying Out the VR Feature

If you’ve already got a VR headset then you can try out RoboDK’s new feature immediately.

But, what if you don’t have one? There are a few options to try out VR tech.

1. Buy a Medium to High-Tech Headset

Of course, you could just jump straight in and buy a high-tech VR headset. This will be a good option if you have already decided that you want to add virtual reality capabilities to your business and have just been looking for a good excuse to get started. Now is your chance!

There are a lot of rental options for virtual reality. Rentals are a good way to “try before you buy” are usually around $10 to $40 a day. Remember to check that your computer specifications match the requirements of the VR system, as most of them use your computer’s graphics card. If not, some rental companies also rent out VR-ready laptops.

You might know someone who has a VR system already and could lend you it for a day or two. Reach out to your network and ask if you can try it out.

You don’t necessarily have to invest in the high-tech options. You could spend $20 to $100 on a lower-tech headset, such as Samsung Gear, which will allow you to get a feel for VR. Just remember that the experience is quite different. If you plan to use RoboDK for VR for several hours on end — though always remember to take breaks — this is not going to be very comfortable with lower-tech options.

Finally, you could make your own VR headset! There are various designs and kits for Google Cardboard and similar sets which can be bought for only a few dollars online. As with the other low-tech options, the experience is not perfect but it is a cheap way to get a feel for what might be possible.

There really should be nothing holding you back from trying out robot programming in a VR environment. Once you’ve got a headset, download the latest version of RoboDK to try out the new feature!