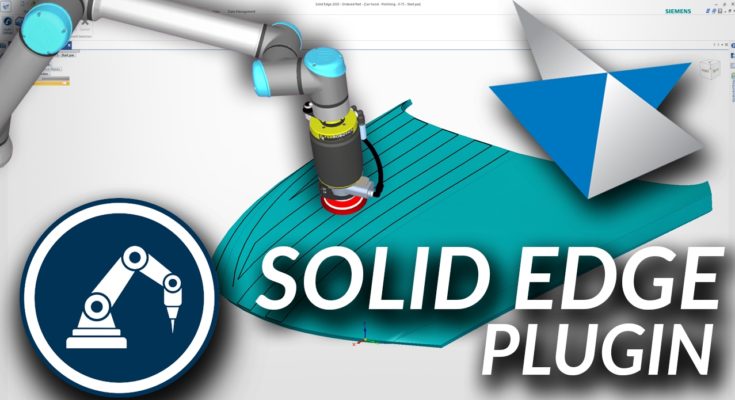 Want to create models for your robot programs without worrying about dodgy CAD models?

The new plugin for Solid Edge allows you to get the power of synchronous technology with the easy robot programming of RoboDK.

Everyone has their favorite CAD program. When I was going through university, mine was Solid Edge. It was the first one that I learned and I stuck with it for years.

Solid Edge provides a type of modeling that very few other CAD packages do — its synchronous technology. If you’re a fan of this approach, your robot programming is about to get even easier.

Up until now, users of Solid Edge could only export their models into RoboDK the “old-fashioned way” (i.e. exporting the model to a file and dragging it into the RoboDK window). This is quite easy to do but it isn’t the slickest way possible.

Fans of other CAD packages already have seamless integration with RoboDK (including Inventor, Fusion 360, Mastercam, Rhino, and more).

Now the same capability has arrived to Solid Edge!

What is Solid Edge?

Solid Edge is a CAD program created by Siemens PLM Software. It is designed to be affordable, easy to use, and able to handle large assemblies.

Like many CAD programs it allows you to create and test 3D product models for your designs. It includes simulation, drafting, and assembly modes to allow you to go all the way from idea to final product design. With Solid Edge CAM, you can also generate paths for CNC machining.

People often make a comparison between Solid Edge and SolidWorks. These two CAD packages are both very popular and both are highly capable for most engineering tasks.

We wrote previously about SolidWorks when we released our RoboDK plugin for it.

Although the two software packages are often compared, there are some key differences between them.

For one thing, SolidWorks is a product of French software company Dassault Systèmes while Solid Edge is from the US company Siemens PLM Software.

According to some reviews, Solid Edge has a slightly steeper learning curve for people who are completely new to CAD. SolidWorks also has the capability for more complex simulations, like liquid simulation.

However, the big thing that sets Solid Edge apart from all the rest is its synchronous technology.

The Power of Synchronous Technology

Most CAD packages are based around the concept of parametric modeling. Objects are built by creating features and constraints, which are defined by parameters.

These parameters are defined sequentially with each feature being built upon the previous ones. If you want to change the size of an existing feature (e.g. increase the size of a hole), every change after that one in the history tree will be affected.

Parametric modeling is great if the designer knows what they are doing. However, the history tree can quickly become unmanageable if it’s not handled correctly.

This can lead to dodgy CAD models that look right but are almost impossible for anyone to change (other than the original creator, who might have forgotten how it was built if a long time has passed).

Direct modeling provides a different approach. Instead of building models up feature-by-feature, you edit the model directly. Some people liken this to modeling with a lump of clay and it’s similar to the way that models are built for 3D animation. This gets rid of the problems of the history tree but can also introduce challenges when creating easy-to-manufacture parts.

Solid Edge combines the benefits of both of these approaches by using a method called synchronous technology. At any point, you can choose to edit your model using parametric modeling or direct modeling, as suits your needs in the moment.

Our new plugin will allow you to get the most of this (and all the other features in Solid Edge) when creating models for your robot program.

As with our previous CAD program plugins, the new plugin provides seamless integration between Solid Edge and RoboDK.

The newest version of RoboDK (which can be found on the download page) includes the Solid Edge plugin. After installing, you should now find that the new plugin menu is visible inside Solid Edge.

The plugin acts as a one-way bridge from Solid Edge to RoboDK. Using the new menu, you can send parts, paths, curves, and points directly to RoboDK. They will be automatically loaded into your robot program in a format that is suitable for robot programming.

The RoboDK toolbar includes the standard 5 buttons found in all of our plugin menus:

Is this Plugin Right for You?

If you are already a fan of Solid Edge and RoboDK, this new plugin is definitely a good addition to your workflow.

Not using RoboDK yet? This could be a great opportunity to test out our robot programming software for your needs. Just download a copy and try it out.

How to Get Started Using the New Solid Edge Plugin

Getting started with the new plugin is really as easy as updating your version of RoboDK and opening up Solid Edge!

For more information about how to use the plugin menu, along with detailed steps and screenshots, check out the documentation page.