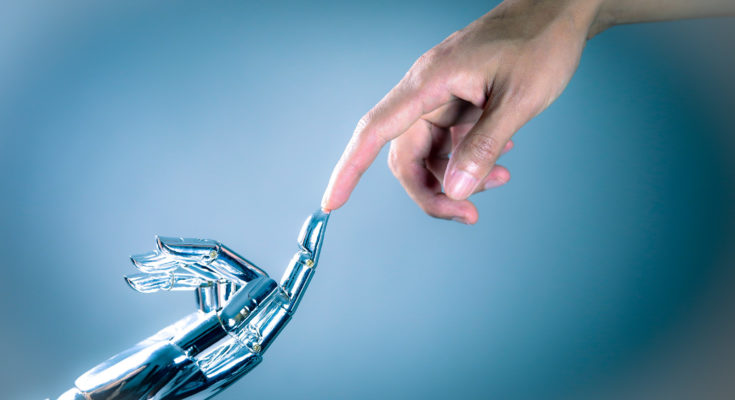 There are some weird and wonderful end effectors out there… and you could use RoboDK with any of them! Here are 10 of the most interesting ones.

Every year, a few new unusual end effectors appear in the robotics media. This year it’s an origami gripper, last year it was a robot hand that can give you a high-five.

One great advantage to the way RoboDK handles end effectors is that it can pretty much be used with any end effector. You are not restricted by a small catalog of available end effectors. You can use whichever end effector you like and get started in just 5 minutes.

This is great news if you want to use one of the more unusual end effectors available.

Here are 10 of the strange and amazing robot end effectors from the last few years.

OnRobot’s Gecko Gripper is really a rising star this year. It was awarded a silver at the 2019 Edison Awards, an award which celebrates innovation in various fields (the gold prize in robotics this year went to a robot bricklayer).

It’s a gripper with a difference. Instead of using vacuum gripping or articulated fingertips, the Gecko Gripper makes use of millions of microfibers. These stick to objects via the powerful “Van der Waals force” which makes use of the strong inter-molecular forces — the same force that allows gecko lizards to climb up sheer walls.

The latest futuristic end effector comes from a team from MIT and Harvard universities. It is a suction gripper which was inspired by an origami shape called a Magic Ball. It looks a bit like a flower or a Venus flytrap plant.

The gripper consists of a soft internal skeleton and a flexible, airtight skin. When the vacuum is applied, the gripper deforms to conform to the shape of the object it’s grasping. In terms of robot control, this could be used in a similar manner to any vacuum gripper, though the gripper is still in the research phase so not currently on the market.

One “famous” futuristic end effector from a few years ago comes from Festo, who specialize in biologically-inspired robotic vacuum technologies. Their octopus-inspired TentacleGripper is quite a unique end effector.

The gripper is modeled on the shape of an octopus tentacle. It has no skeleton which allows it to wrap around an object and get a good grip. The control of this one could be tricky but it’s very flexible.

Let’s move away from grippers, for now, to look at an intriguing robot end effector. In 2018, designers in Zurich made a robotic-driven tabletop which tracks people’s faces and moves as though it has a life of its own.

The artwork uses ferrofluids, a type of liquid that becomes strongly magnetized in the presence of a magnetic field. The robot is fitted with a custom-designed magnetic end effector. Using a camera with face detection, the fluid is programmed to follow people around when they look at the artwork.

A hand is probably not the most unusual end effector you can think of, but it’s worth mentioning Shadow’s Dexterous Hand. The Shadow Robot Company has been making robot hands for over 20 years.

The hand is probably the closest that a robot end effector has yet come to mimicking the human hand. With the right programming, it can pick up pretty much any object that a human can.

Fruit picking has become quite a popular robot application over the past few years. It allows fruit growers to reduce the costs of picking, but it also improves the quality because each fruit can be picked at exactly the right moment for optimum ripeness.

Different fruits require a different end effector. I particularly like this pepper picking end effector, which incorporates a flexible vacuum arm to grab the fruit and a pair of scissors to cut the stalk (yes, pepper is a fruit… botanically speaking at least).

Sorting recycling is a laborious task. Wouldn’t it be great to give it to a robot? Another research-stage end effector from this year is the Rocycle from MIT. What’s unusual about this gripper is the way that it incorporates sensing into the fingertips of the robot.

On the surface, the end effector doesn’t look very different from your average two-fingered robot. But, beneath its Teflon-wrapped fingertips, it hides an innovative way to sort your trash. Its conductivity sensor detects if an object is metal (e.g. cans, tins), its variable-stiffness fingertips detect the size of the objects with a strain sensor, and it contains pressure sensors to determine if a material is paper or plastic.

One task that you might not think you’d need a robot for is operating a smartphone. However, a few years ago a team from Fraunhofer IPA created an end effector for exactly that.

The end effector incorporates a touch-screen stylus which can be used to test different usage scenarios for Human Machine Interfaces. The benefit of using a robot for this task is that it can test the lifetime of a touch-screen device in just a few days.

Company Tactile Automation Inc has a similar system, which even includes a tool changer to simulate different touches.

This robot end effector is really quite silly… but fun! Developed by a researcher at the University of Southern California last year, the end effector allows robots to give humans a “high five”. It’s basically like a giant foam hand.

The purpose of this end effector is to allow social robots to play “bi-directional clapping games” (like the ones you may have played as a kid) to improve people’s engagement with robots.

10. Any End Effector In Your Imagination

All you need is a 3D CAD model of the end effector, a way to program it and you’re good to go! You can easily get programming in no time. 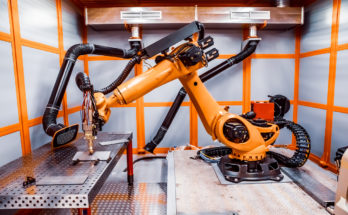 Why You Should Pick Robot Engraving for Your Products

What’s the Difference Between Offline Programming and Simulation?