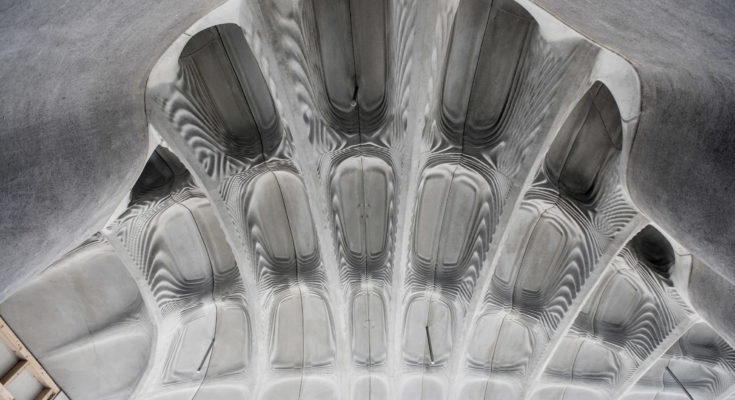 3D printing has changed the face of architecture. Here are 10 of the most impressive buildings that robots have printed.

2018 was a momentous year for 3D printed architecture.

In previous years, we have seen various research applications of 3D printing technology — such as the RoboDK-powered concrete 3D printing we demonstrated last year. In 2018,  however, it seems that 3D printed buildings changed from being “a nice idea” to being a real viable building process.

Here are 10 of the most impressive and breakthrough building projects from the past year.

Possibly the most momentous occasion happened back in July of this year. The Yhnova project made history when the first residents moved into a 3D printed house in Nantes, France.

Instead of using concrete as a printing medium, as many robot printers do, the structure of the house was printed with a hard insulating foam, using the BatiPrint3D technology. Concrete was added between the layers of foam to improve its strength. This produced a very affordable house with good protection from the cold. It took only 54 hours to print, then took 4 months for contractors to fit the windows, doors, and roof fixtures.

Affordability is one of the huge benefits of 3D printing. Houses are built quicker at less cost. This is certainly the vision for the NewStory construction printer, which reached prototype stage back in March of this year.

Silicon Valley startup ICON aims to use their new printer to produce houses at just $4000 each. The team also received $9 million in seed funding this October.

3D printed bridge in the Netherlands. Photo via dezeen.com.

The project was first proposed back in 2015 and the bridge has gone through a few different iterations since then. The original plan was to build it on-site but this idea was deemed too dangerous.

The building phase is now complete and the bridge will be installed across a canal in Amsterdam in 2019.

Another first was achieved in September this year, this time by the US military. They managed to achieve something which the MX3D bridge did not: build a structure in-situ. Captain Friedell said “People have printed buildings and large structures, but they haven’t done it on-site and all at once. This is the first-in-the-world on-site continuous concrete print.”

Usually, it takes 10 marines 5 days to build a barracks out of wood. With the 3D printer, they were able to build a 46 square meter concrete barracks in less than 2 days.

3D printing is not reserved for new building projects. It can also be used to repair existing structures. That’s exactly what it was used for in the city of Palekh, Russia in October this year.

Using a giant construction printer (rather than a robot) from AMD-SPECVIA, the project was the first large-scale 3D printed water fountain in the world. The restoration was on the historical Sheaf fountain by sculptor Nikolai Vasilyevich Dydykin.

Of course, not every 3D printed project is at its final build stage. there is still a lot of pioneering research being done into 3D printing with robots.

Instead of using a single, fixed robot to print the concrete — as we have seen in the past — the team mounted concrete extruders onto two mobile robots which work collaboratively to build intricate structures. This could lead the way for large-scale building printing projects, allowing mobile robots to work together and further reduce the time to build.

As you can see from the previous examples, one of the most exciting aspects of these new 3D printers is the variety of different materials that can be printed with them. We are not just limited to basic concrete mixes, all manner of materials can be used to build weird and wonderful structures. 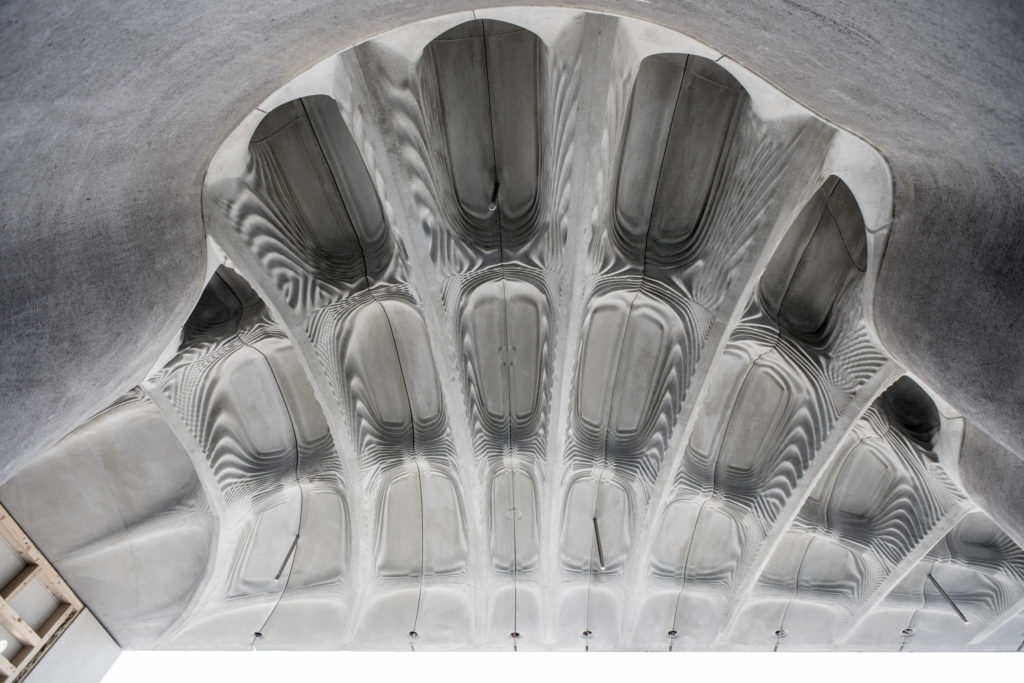 In August, a research team from ETH Zurich university combined 3D printing and sand-casting to produce a stunning concrete ceiling. The process involved printing the complex shape of the ceiling using layers of sand, then using this sand as a mold to produce a second, negative mold. This negative mold was then sprayed with glass-fiber-reinforced concrete to produce the final ceiling. Although the team could have printed the concrete directly, their method allowed for much better strength with more intricate details thanks to the addition of glass fiber.

ETH Zurich was clearly “on a roll” this year as they also pioneered another 3D printing technology for architectural projects. Well… not 3D “printing” exactly. More 3D knitting.

In November 2018, they programmed knitting machines to form the shape of a complex pavilion. The team then flew to Mexico City with the knitted forms in their suitcases. When they arrived, they suspended the knitted sheets and covered them with concrete to form a unique structure.

9. First Concrete Printing at Any Angle

Although it is a very flexible process, 3D printing can be limiting. In particular, you are limited by the fact that you have to build one layer on top of the previous one.

In September, a new technique was developed by researchers from the Centre for Information Technology and Architecture in Denmark. Instead of printing on a flat print bed, the team used an industrial robot to print concrete onto a curved, vertical wire mesh. The concept, called SCRIM, could lead the way to very complex new shapes in architecture.

There really is only one news story I can use to wrap up this post… with a vision for the future. In July, five teams won in NASA’s 3D Printed Habitat Competition which was launched in 2015. The aim of the challenge was to created digital representations of what 3D printed structures would look like on the surface of Mars.

It looks like 3D printed architecture is not just a worldwide phenomenon. It’s also out of this world!

For information on how to achieve 3D printing with RoboDK — with concrete or any other material — check out our previous articles on 3D printing.