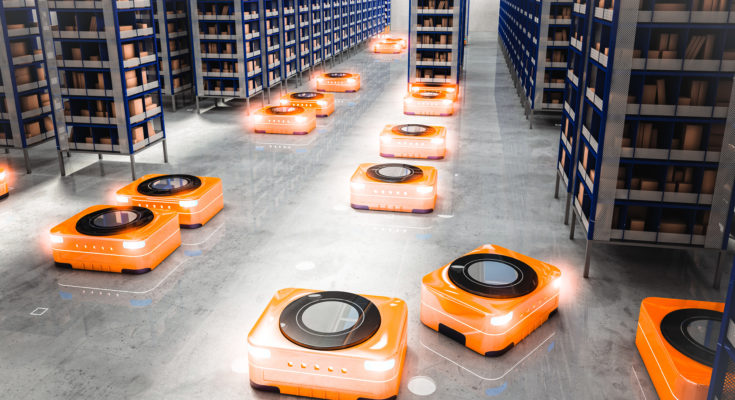 We’re not the only ones who have been talking about robot motion planning recently. Some fascinating developments this year mean motion planners are a trending topic!

Motion planning is not a new topic… not by a long mile. Since the very beginning of modern robotics (in around the 1960s), researchers and engineers have been looking for ways to improve the trajectory planning of their robots.

A lot of progress has been made. Slowly and surely the algorithms have improved. Robots have gradually become able to automatically plan their own routes without bumping into things.

We’ve been thinking a lot about motion planning recently because we added a motion planner to the latest version of RoboDK. However, these new hardware technologies approach the problem from a whole new perspective.

Why Is Hardware Motion Planning Needed?

The traditional problem with motion planners is that they are quite slow… in some cases very slow. This is absolutely fine if you are planning your robot’s movements in advance (as is the case when you’re using the one in RoboDK) but it is not very good if you want your robot to react in real-time.

There is a growing need for motion planners which can react and change their plans “in the moment.” Robots like Atlas from Boston Dynamics are finally overcoming some of the big physical challenges that have held-back robots for years — robots can now run, jump, and backflip with ease. But, these physical advancements are basically useless if the robot has to stop and wait for 30 minutes every time it needs to re-plan its route.

Even though motion planning algorithms have improved hugely in the past decade, it is still almost impossible to plan routes in real-time using the robot’s on-board computer.

That’s where these new hardware motion planners come in. Over the last couple of years, researchers have been working to find ways to offload the computation-heavy parts of motion planning to dedicated hardware.

Here are four of the new hardware-based motion planners which are being developed for robots right now:

Realtime Robotics was listed as one of the “10 robotics startups to watch in 2019” in The Robot Report at the start of this year. They recently received $2M in seed funding.

Not sure what “roadmaps” are? Check out our previous article for an introduction to motion planning.

Intel’s The Search-and-Rescue SoC (System-on-a-Chip) is one of three hardware motion planners which were announced at International Solid-State Circuits Conference (ISSCC) in February 2019.

The chip is targeted at small mobile robots with limited size and power resources. Its motion planning is achieved by a dedicated accelerator. On top of this, the chip includes all the computing capabilities needed to control a small robot, including real-time sensing and processing, power management, actuation, and communication.

Although it’s currently limited to mobile robots, the team at Intel is hoping to extend the chip’s capabilities to work for drones.

The second chip announced at ISSCC 2019 is being developed by a team at the University of Minnesota. Unlike the previous two examples, their hardware is not limited to motion planning. It can be used for even more applications.

The Wave Computer is a solid-state chip dedicated to running the A* algorithm.

The A* search algorithm is one of the classic algorithms and is widely used in pathfinding applications. It can achieve high-performance and accuracy, but it can be energy intensive. The team says that their chip is about 1 million times more energy efficient than using the same algorithm on computer and graphics processors.

The final chip announced at ISSCC 2019 was the SLAMmer from researchers at the University of Michigan.

As the name suggests, it uses Simultaneous Localization and Mapping (SLAM). It is a purpose-built chip which can achieve SLAM with 97.9% accuracy when used in a moving vehicle.

SLAM — if you haven’t heard of it — is a very tough computational problem in robotics which involves trying to map an unknown environment using only the data from the robot’s sensors. The algorithm builds the map on-the-fly whilst also locating where the robot is within that map.

SLAMmer isn’t specifically a motion-planning chip. However, without a good map a motion planner can’t do anything.

The Future of Real-Time Motion Planning

Currently, the heavy computation required for motion planning is usually uploaded “to the cloud.” This approach can sometimes achieve real-time performance, but only if your robot has a flawless internet connection and it doesn’t require sending too much data. However, this is not a viable solution in the long term.

Hardware motion planners could certainly be the answer. For applications where real-time motion planning is critical — such as with autonomous vehicles — this type of purpose-built hardware is a great option.

How to Try Motion Planning for Yourself

In industrial robotics, we don’t need real-time motion planning. In fact, generating plans on-the-fly could actually be dangerous in an industrial environment.

What we do need is a motion planner which helps us when we are planning our robot applications. And that’s exactly what we’ve included in the latest version of RoboDK.

You can now try out our new motion planner for yourself!

Check out the documentation for details on how to get started.

What applications can you think of that would benefit from real-time motion planning? Tell us in the comments below or join the discussion on LinkedIn, Twitter, Facebook, Instagram or in the RoboDK Forum.