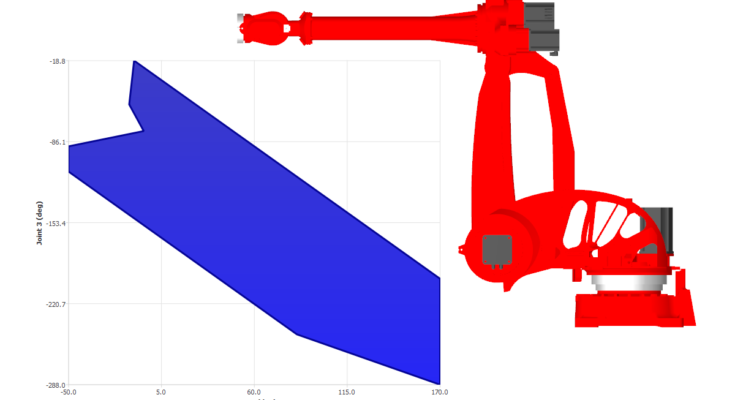 About 10%-20% of robots have this little-known feature. It can mess with your programming if you’re not prepared.

I learned about new robotics concept the other day… robot axis coupling.

RoboDK’s CEO Albert Nubiola told me: “Robot axis coupling is important for robot programming, but not many users are aware of it and often get confused.”

He was right! There is very little written about axis coupling. What’s more, despite the fact that I’ve been a robotics expert for almost a decade, I had never been made aware of this slightly unusual feature.

If you’ve never heard of robot axis coupling, don’t worry. You are not alone.

Axis coupling is not a bad feature. In fact, it has some benefits. But, it can affect your programming if you are not prepared for it. Albert estimates that between 10-20% of industrial robots are affected by axis coupling.

What is Axis Coupling?

Axis coupling is when two or more of the robot’s joints are linked together. They can either be physically linked, with a parallel linkage, or linked in the control software.

Here’s a description of axis coupling in practice…

No Axis Coupling: Most 6 DoF Robots

For most modern 6 DoF robots, the following holds true:

For most 6 DoF robots, there is no axis coupling. This makes control very simple — if you move a joint (e.g. Joint 3) by an amount, only that joint will move.

Comau produces several robots which have axis coupling. This is one of the 6 DoF robot model with axis coupling. All Comau’s palletizing robots also have this feature.

The following is true for this robot:

This slightly affects the control and programming of these robots. Usually, you program a 6 DoF robot by sending 6 values, each corresponding to the desired position of the 6 joints. With axis coupling, this becomes more difficult because two of the robot’s joints are dependent.

If axis coupling is so problematic, why use it at all?

There is one big benefit of using axis coupled robots over traditional 6 DoF robots in some situations: High payload.

As you can see, these two robots are very similar in their reach and repeatability. However, when it comes to payload they are very different.

The robot with axis coupling has over 10x the payload capacity of the traditional 6 DoF robot!

This makes a lot of sense. Much of a robot’s payload capacity comes from the motors in Joints 2 and 3. Usually, the motor at Joint 2 also has to support the heavy weight of the powerful Joint 3 motor. By adding this motor to the base of the robot, it allows Comau to make the structure bigger and stronger without requiring an excessively powerful motor at Joint 2.

What type of robots use axis coupling?

There are three main types of robot which use axis coupling:

How to tell if your robot has axis coupling

Finding if your robot uses axis coupling isn’t always easy… unless you are using RoboDK.

To our knowledge, RoboDK is the only brand-agnostic software which can accurately account for axis coupling.

You can see if your robot has axis coupling in RoboDK in 2 ways:

In some robots, it is easy to tell that a robot has axis coupling because you can see the parallel linkage going from the base of the robot up to Joint 3. Also, there is no motor attached at Joint 3, it is also in the base.

Some robots also have gearbox coupling between Joints 5 and 6.

From our experiences using robots, here are a few pointers about 3 robot brands:

So, open your robot model in RoboDK and give it a try to find out if it has axis coupling.

If so, know that RoboDK will handle it all for you and axis coupling won’t mess up your programming!