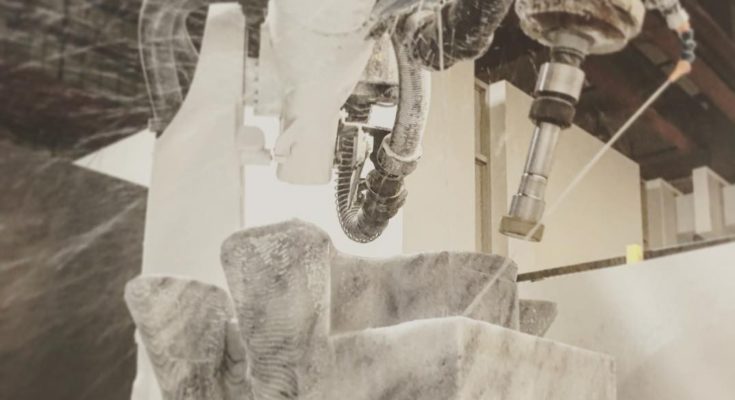 If you could build anything you could imagine, what would you build? Here are 6 amazing things you can achieve by using Rhino and RoboDK together.

What would you build with your robot if there were no limitations?

If the only limit to your designs was your imagination?

And the path from idea to final product was easy?

Robotic manufacturing has the ability to create designs that have never been possible in the past. Robots have an almost unlimited workspace — when coupled with external axes — and they’re able to approach the workpiece from almost any orientation.

But, although physical robots are capable of so much, there’s one thing that can limit the designs that you can produce: the software workflow which transforms your design from idea into robot program.

If your CAD/CAM package workflow is restricted, your ideas are restricted.

That’s why we love Rhino and its algorithmic modeler Grasshopper. It’s capable of producing an infinite array of impressive designs, from 3D printed architecture to intricate wedding rings.

With our plugin, you can turn your amazing Rhino designs into robot programs with ease.

Don’t know what Rhino is? Not familiar with the RoboDK plugin? Check out our previous article How to Use Rhino + RoboDK for Robot Programming

Here are 5 amazing things you can do by using Rhino and RoboDK together.

Rhino is very popular in the world of architecture and it’s easy to see why. Grasshopper’s algorithmic modeling allows architects to create structures which surpass what could ever have been imagined in the past.

Robotic 3D printing expands this capability even further by removing the limits on print size and design complexity. We are no longer limited by the size of the 3D printer’s print bed. Last year saw some very impressive 3D printed buildings which would have been impossible using traditional construction methods.

Another group of creative people who use Rhino is artists. Rhino’s CAM plugins (e.g. RhinoCAM and MadCAM) have the ability to build artistic structures from a huge variety of materials using 3D models as the input.

When combined with RoboDK, this feature gives artists the ability to sculpt their designs in software and then use robot milling to machine the physical sculpture. This makes it much easier to make changes to the artistic design. In the past, artists might have had to spend hours, days, or weeks creating a whole new sculpture if they wanted to change something in the design.

3. Use Algorithms To Model Parts

One of the most powerful features of Rhino is its algorithmic modeler, Grasshopper. This allows you to design models and features using equations, instead of designing them with solid shapes, as is the case with traditional Computer Aided Design.

If the idea of building with equations sounds daunting to you, don’t worry. Grasshopper uses visual programming, which reduces the learning curve if you haven’t done much programming before. This also makes it a perfect companion to RoboDK’s visual interface.

As researchers Branco and Leitão explain, algorithmic modeling “allows the modeling of complex geometries that would pose challenges to a normal mouse-based approach.” They explain that algorithmic modeling is most useful in conjunction with CAD, which is why Grasshopper works so well with Rhino.

The real power of algorithmic programming is how easy it is to change your designs. By changing a single parameter, you can twist, scale, and translate your design quickly, easily, and in ways that would be impossible with traditional modeling. With RoboDK, you can then simulate the robot building your design before you send it to the real robot.

It’s not just your own designs that can improve with Rhino, you can also use it to “reverse engineer” existing designs.

Imagine you are using robot milling to sculpt a copy of a local statue for a client out of hard foam. The statue is not famous — like, say, the Venus de Milo — so there are no existing 3D models of it online.

No problem! With Rhino, you can take a 3D scan of the model and turn it into a model which the robot can print or sculpt.

Converting point cloud data into models is easy in Rhino because it uses NURBS modeling. This means it models the surface of objects instead of building objects out of connected geometric shapes. Here’s an example showing how one designer reverse engineered a sports shoe using this method.

Once you have extracted the model, you can quickly turn it into a robot milling path via the RoboDK plugin.

5. Use Images In Your Designs

What if you could easily incorporate images into your designs?

Imagine how much more inventive your products could be if you were able to draw, say, your client’s logo on the side of each product. This is already possible, to some extent, with RoboDK’s drawing capability, which turns SVG images into robot paths.

However, Rhino take this capability to the next level. Grasshopper’s “image sampler” allows you to extract data from practically any greyscale image and use it in your designs. For example, you could take a photo of your CEO’s face and use robot 3D printing to print a copy of it out of chocolate. Or, you could take photo of your company’s most famous product and use robot milling to cut the image into the concrete wall of your headquarters.

The possibilities are basically endless! This video shows how one designer used the image sampler to map a complex pattern onto the surface of a sphere. Imagine using that with robot machining…

As I said at the beginning of this article, the biggest benefit of the RoboDK plugin for Rhino is the improvement it makes to your workflow. You can
quickly make changes in Rhino/Grasshopper and immediately send them to your robot program in RoboDK.

This allows you to iterate your designs very, very quickly. As computational designer Nono Martínez Alonso explains, fast iteration is already one of the biggest benefits of using Grasshopper. With RoboDK, this benefit is amplified.

You can now make quick changes in your design and test them in a robot simulation before you ever send the program to the real robot. This improves the uptime of the robot, reduces the chance of costly errors, and allows you to optimize the robot program quickly and efficiently.

So… what are you going to build next with Rhino and RoboDK?